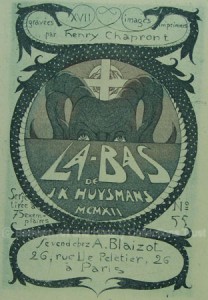 DID YOU KNOW? In 1976, Mailer published a screenplay based on Joris-Karl Huysmans’ novel of decadence and Satanism, Là-Bas (or “down there”). The English translation was published as The Damned. The protagonist, a novelist named Durtal, is researching the life of the 15th century nobleman and madman, Gillies de Rais, who killed scores of children and practiced various forms of sorcery, including a Black Mass. The novel is set in fin-de-siѐcle Paris, and was a sensation when it appeared in serial form in 1891. Mailer’s screen play appeared in Playboy in December 1976, and has never been reprinted. It won the magazine’s annual award for best piece of fiction.

Mailer spoke French fairly well, having studied it in high school, college and at the Sorbonne on the GI Bill in 1947-48. He said that “the French novel has always been more congenial to me than the English, and much of what I learned as a young novelist came from Stendhal, from Proust, and from Malraux.” He went on to say that he also enjoyed the writing of Flaubert, Zola, Gide, Huysmans, Baudelaire, Sartre, George Simenon, and the writing of his great friend, Jean Malaquais, who Mailer met in Pairs in 1947.