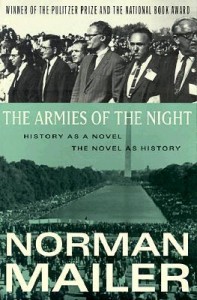 DID YOU KNOW? The Mailer book that received the best reviews was not his best-selling 1948 war novel, The Naked and the Dead, but a nonfiction book which was not a best seller, The Armies of the Night, his account of the October 1967 anti-war March on the Pentagon. Winner of a Pulitzer and the National Book Award, Armies barely edged out Naked, 4.100 to 4.031. These numbers were arrived at by rating the reviews his books received in 25 major publications (New York Times, Los Angeles Times, Time, Newsweek, New York Review of Books, National Review, Esquire, Chicago Tribune, Washington Post, Boston Globe, Commonweal, New Yorker, etc.) on a five-point, low- to-high scale, 1.0 for a dreadful pan, and 5.0 for an enthusiastic review with few caveats. Coming in third was Mailer’s 1972 collection, Existential Errands (3.777), and fourth, The Executioner’s Song (3.74). The book with the worst reviews was Mailer’s second book, Barbary Shore, a novel set in Brooklyn, which racked up a score of 1.944 (reviewers disliked the debates about politics and economics which take up half the novel). In next-to-last place is Portrait of Picasso as a Young Man, which totaled out at 2.000 (it was reviewed in large part by art critics and scholars, who felt Mailer was poaching on their turf). The publication that gave the most positive reviews to his work was The Village Voice, which he co-founded (3.929 average); the most negative reviews came from the liberal, anti-communist bi-weekly, The New Leader (2.167). Two others of note: The New York Times Book Review (3.111) ; and The New Yorker (2.846). A total of 417 reviews were rated for this study, which was published in the bibliography Lennon and his wife Donna Pedro assembled, Norman Mailer: Works and Days (Sligo Press, 2000).